Nature-based solutions in practice: the example of the Namey Nichu watershed in Bhutan

As part of the BMUB-IKI funded Scaling Up Mountain Ecosystem Based Adaptation project, an IUCN delegation from the Asia Regional Office and Nepal Country Office visited Bhutan in January to learn about the implementation of Payment for Ecosystem Services (PES) in the country, and to discuss opportunities to strengthen the process with ecosystem-based adaptation strategies. 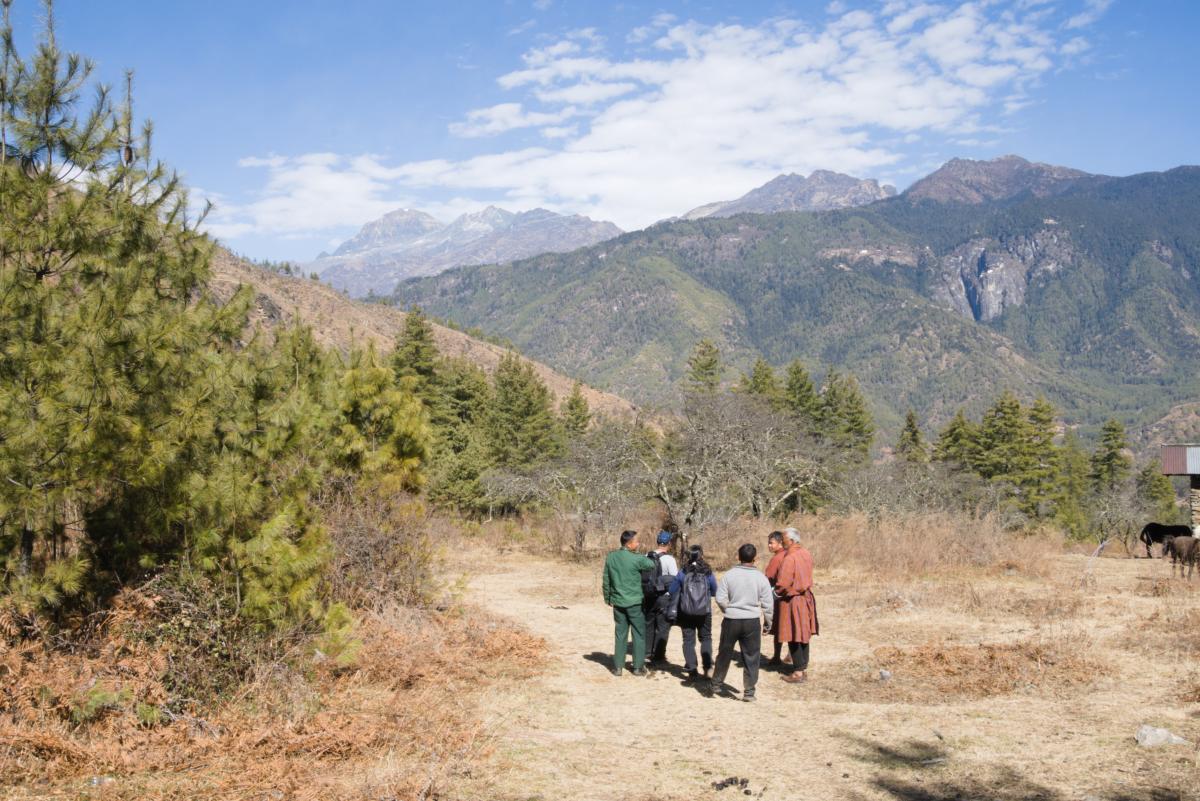 The Namey Nichu watershed, located in Paro district is a medium-sized watershed managed by a community forest (CF) group, as part of a 10-year forest management plan developed by the group. Located in front of the “Tiger Nest”, a major tourist site in Bhutan, the Namey Nichu area is currently booming with hotel development. While this is putting pressure on natural resources, it also provides an opportunity for communities to generate more income.

In 2015, PES mechanisms were applied to the Namey Nichu watershed, as part of the first phase of a government initiative. The principle is simple – communities commit to managing the watershed sustainably, to ensure the provision of its ecosystem services (with a main focus on water provision). In exchange, the main water users downstream, which includes four hotels and water associations, pay a fee to the CF group for the service provided. This support, which amounts to approximately US$ 2,000 per year, is managed by the CF group and allocated to community-level investments related to development and livelihoods.

Photo: Raphael Glemet, IUCN
The PES schemes in this watershed include four activities that the CF group is in charge of. They include maintaining a buffer area of 50 meters from the spring of stream or water body (normally 30 meters, as per national legislation), not to allow grazing at night, cleaning spring and rivers twice a year, and protecting the forest against illegal activities through monitoring and patrolling.

The implementation of these activities is regularly monitored by a team which includes the CF group, forest department, and forest users. Verification is done twice a year, in the middle and at the end of the year.

Consultations for the assessment and planning of the second PES phase, which started in December 2018, revealed that concerns have been raised about whether there could be mechanisms to better control the water allocation to water users, which are mainly hotels. The meetings also showed that there was a need to determine a mechanism to ensure equitable distribution of water.

Despite fulfilling their commitments in term of watershed management, key issues faced by communities in managing the watershed include the drying of springs in the dry season. This is a relatively new trend which is likely linked to climate change. Another issue is the growing number of hotels in the area. While these hotels provide more income to the PES mechanism, they also require more water, which could result in an overuse of water resources.

“These activities will help the Royal Government of Bhutan to improve the PES strategy at the national level and help replicate or upscale the same in other parts of Bhutan,” said Jamyang Phuntshok, Deputy Chief Hydromet Officer.

As part of the global Scaling Up Mountain Ecosystem-based Adaptation project, IUCN Asia will support the integration of EbA as a strategy to strengthen the forest management plan and further enhance PES mechanisms in Namey Nichu.

The project, in particular, could provide capacity-building sessions on EbA approaches in a watershed to local communities and forest department staff. This would be the first step towards facilitating a rapid vulnerability assessment for the watershed and the design and implementation of adaptation measures enhancing the resilience of the ecosystems.

The three-year Scaling Up Mountain Ecosystem-based Adaptation: Building Evidence, Replicating Success, and Informing Policy project is jointly implemented by IUCN and The Mountain Institute (TMI), in close partnership with local governments and partners. Funded by the BMUB-IKI programme, the project builds support for Ecosystem-based Approaches (EbA) in mountains, and aims to scale up EbA work started during the Mountain EbA Flagship Programme in the Himalayas (Nepal), Mount Elgon (Uganda) and the Andes (Peru). The project also aims for EbA to be adopted in neighbouring Bhutan, Kenya and Colombia. The Mountain EbA Programme seeks to benefit local communities as well as the millions downstream who depend on water and other ecosystem products and services that come from mountains. The EbA experience and data developed through this programme will be instrumental in building wider support and generating financing for EbA within national governments and at international forums. As climate change impacts intensify across the globe, the prevalence of nature-based solutions for… CEESP News: by RADHIKA GOYAL, of GlacierHub; undergraduate in Economics and Computer…