Giving mangroves a voice: One man's mission to protect the future of Bahak Indah

Bahak Indah, a mangrove-lined beach running along the coast of Probolinggo, East Java, is a major attraction for visitors. But just fifteen years ago, the only vegetation found on the beach was a type of spinegrass with such sharp tips that residents of Curah Dringu and Dungan Villages avoided the area, for fear of being cut. 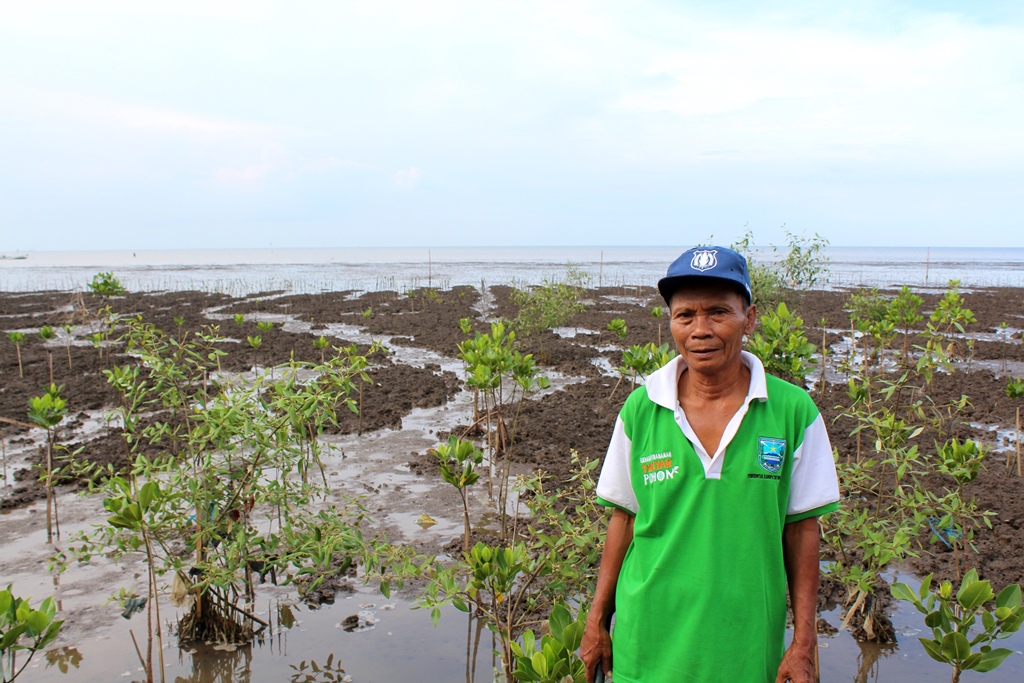 A story of dedication

The pioneer behind Bahak Indah’s transformation is 64-year-old Samsuri, who for 20 years has been planting mangroves and raising awareness among the local communities and government on the importance of mangroves

Samsuri and his family used to walk on the east side of the beach, where the mangroves were thick and healthy. In the early 1990s, he noticed that the mangrove roots stabilise sediment, and had the idea of growing mangroves closer to his village, where fish and shrimp ponds were being heavily impacted by coastal erosion. At a time when most of his community were unaware of the role of mangroves in coastal protection, and mostly used mangrove leaves as livestock fodder, this was a revolutionary idea.

In 1998, during Ramadan, Samsuri put his idea into action. After suhoor (the meal eaten at dawn before the start of the fast), he and his younger brother collected mangrove seeds and planted them on Bahak Beach, near the villages. Samsuri often spends his nights removing barnacles – which will kill saplings after a month or two – from the bark. During the day, Samsuri  removes plastic waste from the fragile branches. 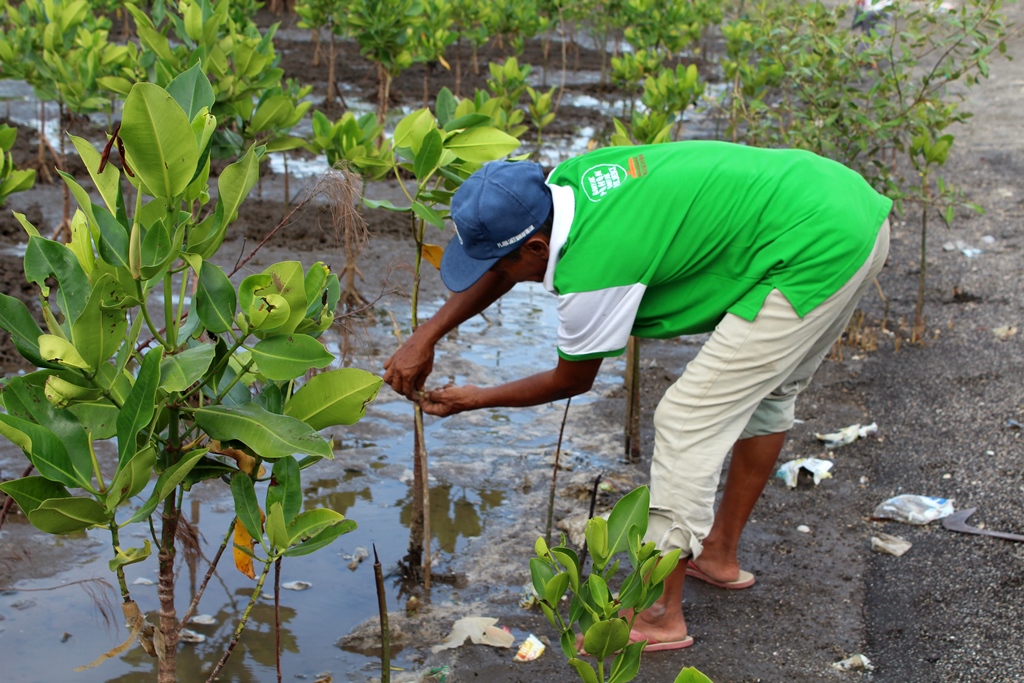 The path to recognition

In 2012, Samsuri received mangrove seedlings for the first time from the local forestry office. A year later, the local Agriculture and Forestry Agency and the district Fisheries Office helped establish a community group called Perahu Layar (meaning ‘sailboat’). With Samsuri as the leader, Perahu Layar rehabilitated coastal areas by planting mangrove and casuarina and cleaning the beach.

In 2016, with the support of Mangroves for the Future (MFF), Samsuri and Perahu Layar collaborated with a local NGO in Probolinggo – the Institute for The Study and Empowerment of Society (ISES) – to plant mangroves in the degraded coastal areas of Dungun and Curah Dringu. ISES worked closely with the local government, and implemented the project in collaboration with Samsuri and Perahu Layar. Through the MFF project, Samsuri and his team’s conservation work received more attention and appreciation from the local government of Probolinggo.

The local government, to fill the mandate of the central government, had tried to plant mangroves several times in Curah Dringu and Dungun villages. But since the trees were not cared for after planting, the efforts failed, a point that Samsuri is keen to emphasise. "Mangrove restoration is not just about planting, but maintenance,” he explains, "it takes around three years for the roots to become strong enough to support the trees." 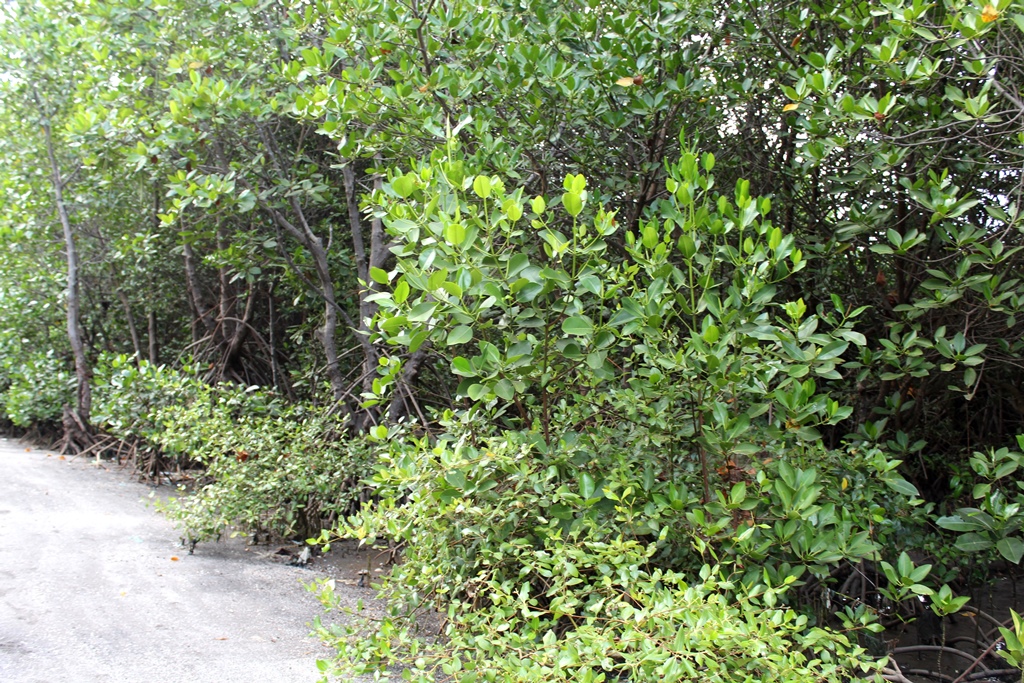 These mangroves, planted by Samsuri, have grown to maturity under his care Photo: © Cynthia Nurcahya / MFF

Samsuri’s efforts have been well-recognised by the local government, who gave him an award in February 2017 for his dedication to environmental conservation. In November 2017, he was invited by the Islamic State University of Sunan Ampel to speak at their Sustainable Mangrove Ecosystem Seminar: ‘Living in Harmony with Nature.’ Following the seminar, Sunan Ampel University started sending its students to Curah Dringu and Dungun villages to learn about coastal conservation from Samsuri and his group.

Today, many people benefit from Samsuri’s dedication, and local communities have a deeper understanding of the direct link between mangroves and their economic welfare. With their fish and shrimp ponds protected and thriving, local communities have started opening kiosks near the coast to sell food and drinks to visitors. Village authorities are fully supportive of the on-going conservation efforts, and have banned mangrove destruction.

Samsuri and Perahu Layar intend to continue growing mangroves on Bahak Indah beach, further protecting the villages by buffering them from the sea.