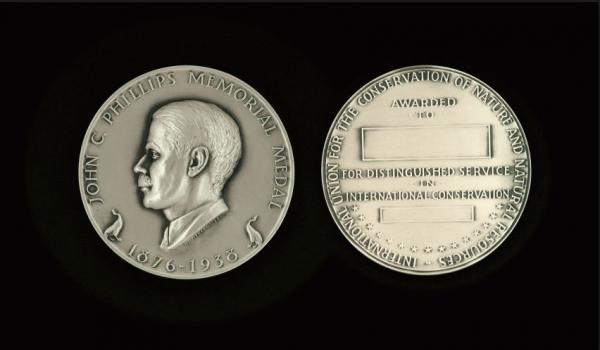 Born in 1876, Dr Phillips specialized in Medicine and Zoology and made significant contributions to science, particularly in taxonomy and genetics. He was vitally concerned with international cooperation for the conservation of nature, being closely involved with developing the early wildlife treaties. In his memory, his friends established a Memorial Medal and entrusted the awarding of this recognition to IUCN. The Medal has been presented at every General Assembly and Congress since 1963.

Distinguished recipients of the Award have included HRH The Prince of the Netherlands, Indira Gandhi, HM Sultan Qaboos Bin Said of Oman, Professor E. O. Wilson, Dr Luc Hoffmann, Dr José Aristeo Sarukhán  Kermez and Maria Tereza Jorge Pàdua, each of whom has contributed their vision, wisdom and perseverance to furthering the global conservation cause.

In September 2021, on the recommendation of the IUCN Council Awards Jury, the Phillips Memorial Medal was awarded to Dr Alfred Apau Oteng-Yeboah at the IUCN World Conservation Congress in Marseille, France.

Dr Alfred Apau Oteng-Yeboah is a Professor of Botany, based at the University of Ghana. He holds a BSc. (Ghana) and a PhD and has published extensively in reputable scientific journals in plant systematics, ecology, biodiversity and traditional knowledge. He has been a passionate leader and promoter for the conservation movement for many years. He was the Deputy Director-General of the Council for Scientific and Industrial Research (CSIR-Ghana) from 1998 to 2006 and served as board/council member of a number of Ghanaian public institutions, including the Environmental Protection Agency (EPA), and the Ghana National Commission for UNESCO.

He has dedicated himself to establishing a mechanism in order to fulfil his belief “biodiversity will be placed on the political agenda.” He has co-chaired the Executive Committee of the International Mechanism of Scientific Expertise on Biodiversity (IMoSEB) and has played a significant role in the global consideration process toward the establishment of a science-policy interface for biodiversity and ecosystem services since 2005.His recognition of the importance of the value of ecosystem services, which can provide social and economic stability, and belief that we should place special emphasis on the sustainable use of biodiversity in addition to the conservation, led to his appointment as chair of the Steering Committee of the International Partnership for the Satoyama Initiative (IPSI) since its start-up in 2010.

IPSI aims to promote the conservation of regions that have been sustainably used and have offered benefits from its rich natural environment to people such as “Satoyama and Satoumi” in Japan (secondary nature areas) and to realize a society in harmony with nature. The decision, which recognized the importance of the Initiative was adopted at CBD-COP10 in 2010.

The main objective of the initial activities of the Satoyama Initiative was to disseminate its concept and value globally, Dr Oteng-Yeboah played a crucial role in the discussion at COP10 during which the Initiative was recognized by various Parties.

Dr. Oteng-Yeboah has also served as Vice-Chair for the Standing Committee of Convention on International Trade on Endangered Species of Wild Fauna and Flora (CITES) and has served as a member of the International Advisory Committee for UNESCO Biosphere Reserves for a three-year assignment, and provided support for the revision of the establishment of new Biosphere Reserves.