Informing Freshwater Species Conservation in the North-Western Mediterranean: Under Water, Under Threat

Freshwater biodiversity in the Mediterranean Basin Hotspot is remarkably diverse and highly threatened as confirmed by the IUCN Mediterranean Biodiversity Red List assessments. The process to identify and delineate of freshwater Key Biodiversity Areas (KBA) in north-west Mediterranean, including Portugal, Spain, France, Italy to Malta, has recently been completed with the aim to provide critical data for priority conservation actions on the ground and better catchment management.

“A major bottleneck to conservation of freshwater ecosystems is the lack of information on where the most important sites of biodiversity are located. This lack of information has hindered the development and implementation of appropriate management actions for freshwater species, as well as private sector efforts to minimise impacts through the adoption of effective environmental safeguards” says Laura Máiz-Tomé – Programme Officer at IUCN Freshwater Biodiversity Unit, Cambridge.

Based on the IUCN Red List published data on species conservation status and distributions of freshwater fishes, mollusc, odonata and aquatic plants, 218 KBAs were confirmed by regional experts, covering an area of 100,021 km2 (13% of the study area). Of these KBAs, 11 also qualify as Alliance for Zero Extinction sites (AZE). AZEs sites are places where species evaluated to be Endangered or Critically Endangered are restricted to single remaining sites. These results highlight the urgency to develop and implement effective conservation actions for freshwater biodiversity and better water management.

Data gathered by the regional experts show that threats to freshwater species primarily include alterations in hydrology (dams and water abstraction for irrigation and human consumption), competition and predation by invasive alien species, and domestic and agricultural water pollution. These types of threat tend to spread rapidly throughout catchments due to the high levels of hydrological connectivity. For this reason:

“Management of KBAs at the catchment scale is needed to ensure effective species protection from both upstream and downstream threats often originating from some distance outside of KBAs, and to maintain the quality, quantity and timing of water flows required to sustain freshwater ecosystems. Countries in the north western Mediterranean sub-region are recommended to implement an Integrated River Basin Management approach (IRBM or similar) to better coordinate conservation and management actions across sectorial policies such as water, energy and agriculture” says William Darwall – Head of the IUCN Freshwater Biodiversity Unit, Cambridge.

“IRBM is especially relevant for transboundary catchments in the Iberian Peninsula such as for the Duero and the Tajo rivers, where it is strongly recommended that Spain and Portugal fully implement the principles of the EU Water Framework Directive and the UN Watercourse Convention to promote sustainable water use and the protection of connected aquatic ecosystems beyond national boundaries” adds Laura Máiz-Tomé –IUCN Freshwater Biodiversity Unit, Cambridge.

Protected areas are a potentially powerful tool for conservation. However, they are often delineated primarily for terrestrial species such that they fail to include targeted management for the many restricted range and threatened species living in freshwater habitats. This project has found significant gaps in the protected areas coverage of freshwater species, with 16% of the sites identified as freshwater KBAs falling outside of any existing ‘terrestrial’ KBAs or protected areas.

“These sites should be considered within future strategies for improving the representation of freshwater biodiversity within the protected areas network across the Mediterranean region” says Catherine Numa, Species Programme Coordinator at the IUCN Centre for Mediterranean Cooperation in Malaga.

As part of the process 128 potential Site Champions have been identified as individuals/ organizations best placed to raise awareness of the KBAs and the issues faced with regard to biodiversity threat, and to help to implement the required actions to safeguard these globally important sites.

The KBA data will soon be freely available through a number of different online sources, including: Integrated Biodiversity Assessment Tool and the World Database of Key Biodiversity AreasTM   managed by BirdLife International on behalf of the KBA Partnership.

The report is available here: https://portals.iucn.org/library/node/47141 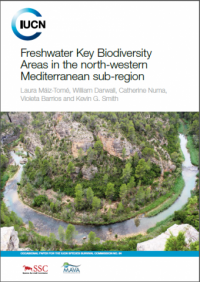