NEW REPORT: IUCN’s Tiger Programme finds there has been an average increase of the tiger population within project sites by 40% between 2015 and 2021

To celebrate International Tiger Day, IUCN is releasing the impact report of Phase I of the Integrated Tiger Habitat Conservation Programme. The report contains data and lessons learned from projects implemented in priority landscapes across six Tiger Range Countries between 2015 and 2021. 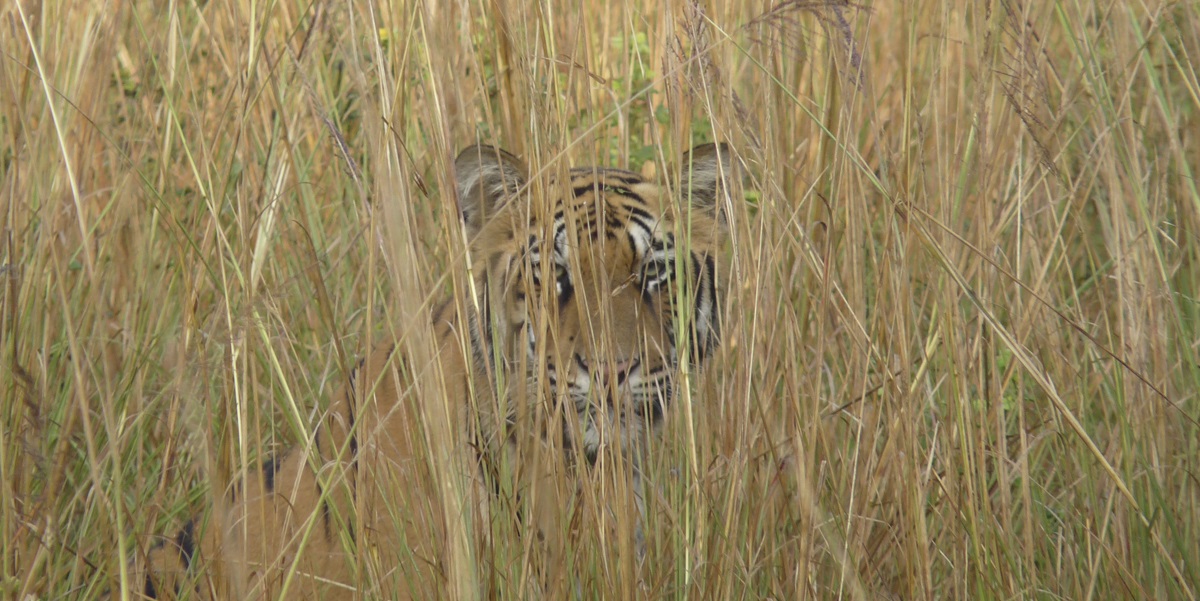 The tiger, Panthera tigris, is listed as ‘Endangered’ on the IUCN Red List of Threatened Species. The largest of all cats, the tiger once occurred throughout central, eastern and southern Asia. However, in the past 100 years, the tiger has lost more than 93% of its historic range and now only survives in scattered populations in 13 countries, from India to Southeast Asia, and in Sumatra, China and the Russian Far East.

Over the past century, tiger populations have fallen from around 100,000 individuals to an estimated 3,500 individuals in 2014. Populations in Southeast Asia in particular have crashed dramatically.

The main threats to tigers are poaching for trade in body parts used in traditional medicines, habitat loss and fragmentation, retaliatory killing after attacks on people and livestock. The majority of remaining wild tigers are isolated, unconnected to other populations and face increasing human encroachment into their territories. Tigers are also increasingly exposed to zoonosis through interactions with domestic or feral animals.

As a top predator and a keystone species, a healthy tiger population reflects the health of the environment. Conservation efforts to protect tigers can therefore contribute to the preservation of healthy herbivore populations, other carnivore species and ultimately the entire ecosystem and its functions.

The Integrated Tiger Habitat Conservation Programme (ITHCP) is an initiative implemented by the International Union for Conservation of Nature (IUCN) and funded by the German Cooperation (BMZ) through the German Development Bank (KfW).

The initiative was created in 2014 as a contribution to the Global Tiger Recovery Programme (GTRP). This landmark global agreement announced in St. Petersburg in 2010 aims to double tiger numbers in the wild by 2022.

The first phase of the ITHCP was implemented between 2014 and 2021, and provided grants to a wide range of organisations, including governments, national and international NGOs. With a total investment of 20 million Euro, the programme developed a portfolio of 12 projects operating in priority Tiger Conservation Landscapes across six Tiger Range Countries (India, Nepal, Bangladesh, Bhutan, Myanmar and Indonesia). In this report, ITHCP projects have been grouped in four main areas, namely: Terai Arc and Transboudary Manas Conservation Area (TraMCA), Southern-Central India and Sundarbans, Myanmar, Sumatra.

In addition, two studies were funded as part of the programme to assess the status of tiger habitat in high altitude ecosystems of the Himalayas and to identify lessons learnt from human wildlife conflict management.

The programme promotes a multidimensional approach to tiger conservation and it is based on three key components:

The ITHCP project portfolio of Phase I managed an estimated 24.8% of the global tiger population of 3,886 individuals living in the wild (unofficial current estimate). Over the period of Phase I, across the programme there has been an average increase of the tiger population within project sites by 40%, with the entire portfolio-wide population growing from 770 individuals to 966 between 2015 and 2021.

Some of the factors that have increased population sizes include training and equipping frontline staff who undertake patrolling. 8,207 staff have been trained, an average of 683 per project, participating in a total of 260 training courses across the entire project portfolio. Of these, 4,886 have been provided with key patrolling equipment ranging from field gear to data management hardware.

Another key area of intervention to safeguard wild tiger populations is to improve coexistence through reduction of human wildlife conflicts (HWC). Although HWC are not a problem for all projects across the portfolio, where HWC is a key component of the project (two projects in Nepal and another in the transboundary area between India and Bangladesh in the Sundarbans) there has been on average a 75% reduction in human mortality caused by tigers and leopards. As part of an integrated conflict management approach, predator proof fencing is a key component of many projects. ITHCP has funded 138,228 km of predator proof fencing across the portfolio.

In order to improve the effectiveness of protected area management, ITHCP has provided equipment and infrastructure. These include 78 guard posts and 24 vehicles (cars, boats and motorbikes).

Working with local communities inclusively is essential for long-term sustainability and conservation of priority landscapes. Six of the 12 ITHCP projects of Phase I have created state-of-the-art land-use management plans together in consultation with local communities as a result of ITHCP funds. Although always an important activity, this is fundamental in areas that do not have well established protected area networks, such as in Myanmar where 5,656 members of local community groups have been directly involved in land use planning.

Other areas for intervention include restoration of habitat across all three habitat categories (core areas, buffer zones and corridors). This includes the removal of invasive species and replanting of trees. Across the portfolio, 6,717 km² of habitat has been restored with over 482,000 native trees planted.

One specific habitat category is corridor. Although this makes up a small percentage of the area covered by ITHCP, corridors are key to ensuring that individuals from different sub-populations within a meta-population remain connected and can disperse to new protected areas to find food and mates.

A key component of all ITHCP projects is the development of sustainable livelihoods for local communities living in and around critically important habitats for tigers and their prey. ITHCP directly affected 81,778 beneficiaries. Of these approximately 54% are women, ensuring gender balance.

Awareness raising is a key activity to ensure local community participation in and support to the programme. The portfolio of the first phase of ITHCP has reached an estimated 440,000 local community members. Much of this has been through newspaper, TV and radio publications. 21%, an estimated 95,000 individuals, have been targeted by more in-depth knowledge transfer techniques such as conservation classes and workshops. This is in addition to the involvement of local communities in land-use planning as mentioned above.

As the first phase of the ITHCP draws to a close, BMZ/KfW have committed a follow-up investment with IUCN of 12.5 million Euro, which will allow to continue protecting tigers across different landscapes and supporting the local communities that live in and around these habitats.

ITHCP future phases aim to consolidate and strengthen the achievements of selected projects funded during the first phase, by scaling up the most impactful activities. In addition, they will complement geographically and thematically the ITHCP portfolio, including working in high altitude ecosystems, where tigers are expanding their range, as a possible consequence of climate change.

2022 will mark the new Chinese Year of the Tiger and the second Global Tiger Summit to be held in Vladivostok, which will assess the progress made in tiger conservation since 2010 and identify priorities and commitments for the future. The results of the first phase of the ITHCP will show the impacts of conservation efforts operating in a multidimensional approach integrating species, habitat and people.