An insight into the cultural and spiritual value of water

Value can be seen from three different perspectives. As an exchange value, meaning the price of a good in the market; as a utility, in other words the use value of a good or service; and finally, importance which relates to the appreciation or emotional value attached to a given good or service.[1]  This last perspective is important to this article, since various religious, indigenous and local groups have given an emotional value to nature itself. The different elements and values that make up the cultural and spiritual significance of nature differ depending on the culture and in that sense, they are entirely context dependent and can change over time.[2]

In 2017, the High Level Panel on Water recognised in its Bellagio Principles on Valuing Water that water has multiple values. In fact, its first and foremost principle is to consider the multiple values to different stakeholders in all decisions affecting water and affirming that “there are deep interconnections between human needs, economic well-being, spirituality and the viability of freshwater ecosystems that must be considered by all”. Depending on one’s beliefs, water can heal, cleanse, purify or bring blessings and the failure to incorporate the full representation of the values of water results in weaker water governance today. This is linked to the necessity to look at water from beyond an economic perspective and to encompass within the scope of water governance the spiritual and sacred values that many indigenous communities, whether in Africa, South America or Oceania, attribute to water. In this piece, we will primarily focus on the spiritual and religious values associated with water, specifically when it is seen as holy, sacred, magical or mythical.[3]

Water, as our most precious resource, has been intimately linked to humankind and cultural development and it has become a source of rich symbolism.[4] It held a spiritual – even divine  – significance for many ancient civilisations. The ancient Egyptians had, amongst others, Sobek, god of the Nile river depicted as a crocodile, while in Aztec mythology, the goddess Chalchiuhtlicue represented the entire range of the natural manifestations of water and as such she was involved in every part of life, from birth to death[5]. For the Maya, cenotes were the gateway to another world, where supernatural beings live and where the souls of the dead go[6]. This divine connection with water manifested itself also through the development of installations aimed at conserving and managing water for ceremonial, economic and social purposes, such as the crop terraces and irrigation systems in the Inca Sacred Valley or the Nazca aqueducts in Peru[7]. 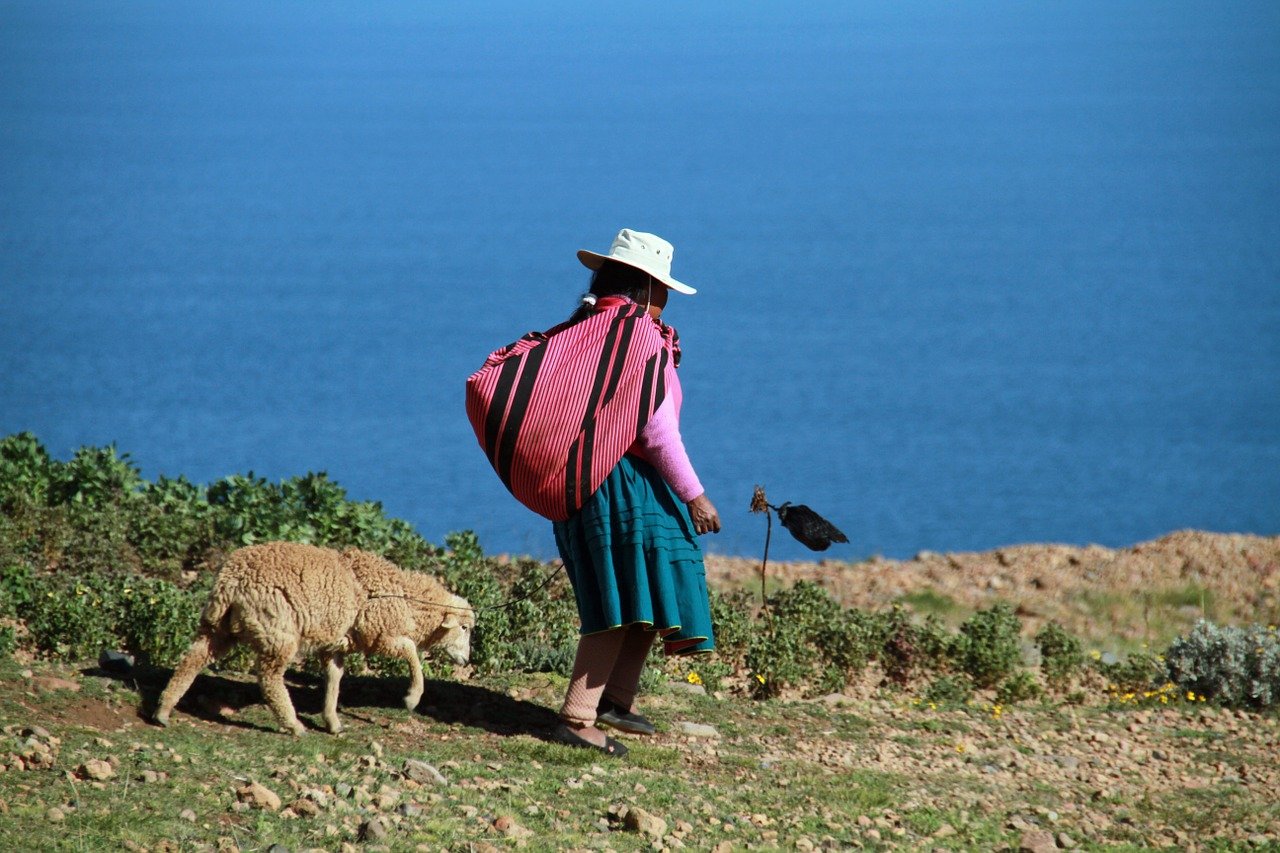 Woman and sheep at Lake Titicaca Photo: Monica Volpin on Pixabay
This spiritual relationship between human beings and water is still present in many indigenous communities today. In the Wayuu community in La Guajira, Colombia, Juya (rain) is seen as the giver of life, the father who allows the rebirth of the dead and in that sense, it represents the source of life and blood of Mother Earth. The vision of water as sacred is even stronger in areas like La Guajira where water scarcity can occur months at a time. For the Wayuu, water is a living being at the heart of traditional rituals and ceremonies.[8] The symbolism of water as a lifeline is also prevalent in the traditional Aboriginal Australian culture of the Ngarrindjeri who see River Murray as “an immense artery of a living body consisting of the Lakes and the bush and over the southern plains and undulating plain”.[9] Worshipping bodies of water as divinities is a custom that still exists today in many religions. For Hindus, the river Ganges, that flows for more than 2,500 km across northern India, is considered sacred. In Hinduism, the river is embodied by the goddess Ganga, Mother of all human beings, and is considered as the holiest of rivers. Hindus from around the world traditionally gather at the banks of the river for holy festivals and immerse themselves in the water for purification from sins.

Nowadays, this spiritual and sacred value of water tends to clash with the perception of water as a resource at the disposal of society that can be used for economic development.  This has led to the interests of local and indigenous communities being overlooked in order to pursue activities such as mining and oil extraction, as well as large dam development for hydropower. Indigenous communities are gradually losing territories and natural resources along with the spiritual and emotional connection to nature and the environment that surrounds them. This shows how essential it is to include and enable full participation, consultation and active engagement from indigenous communities in decision-making processes, particularly for activities that might affect them and their livelihoods. Moreover, understanding the multiple values attributed to water can also help avoid situations where a community’s traditional way of life is disrupted to further another’s economic interests.

Recent efforts to protect the environment, while at the same time respecting and including the perspective of indigenous communities, have led to the development of approaches that embody the traditional Andean philosophy “Sumak Kawsay” or “good living”, which promotes a community-centric and ecologically-balanced way of life. For example, the ‘rights of nature’ are increasingly being recognised in national legislations and jurisprudence. In 2008, Ecuador became the first country in the world to recognise the Rights of Nature in Article 71 of the Constitution: “Nature or Pacha Mama, where life is reproduced and exists, has the right to exist, persist, maintain and regenerate its vital cycles, structures, functions and its process in evolution” and in that sense, the people have the legal authority to enforce these rights on behalf of ecosystems with the ecosystem itself named as the defendant. The first lawsuit based on the constitutional provision of the Rights of Nature featured the Vilcabamba River as the plaintiff defending its own rights to exist and maintain itself when trying to stop a government highway construction project interfering with the natural flow of the river. In a landmark decision, the court ruled to stop the project. Another significant example of this is the Whanganui River in New Zealand, the ancestral river of the Maori tribes of Whanganui. For 700 years, the tribes controlled, protected and depended on their “river of sacred power” until the arrival of European settlers in the 1800s. In 2017, to further strengthen environmental protection of the river, which is believed to be an ancestor in the Maori traditions, New Zealand passed legislation declaring Te Awa Tupua, meaning the river and all its physical and metaphysical elements, to be a person in the eyes of the law.

“Valuing water” was the theme of World Water Day 2021, a day celebrated every year on 22 March to focus the world’s attention on the importance of water and raise awareness of global water governance issues. This year’s theme recognises the importance of integrating the cultural significance of water and the sacred value it holds for human beings in water management and governance. This also involves ensuring the preservation and promotion of traditional indigenous knowledge to preserve these natural resources. These legal milestones testify to the recent efforts undertaken in several countries, not only to give greater protection to the environment, but also to recognise the deep bond and connection that exist between indigenous communities and water. Water is the foundation of life and approaches to valuing it vary depending on users, background and perspectives. As such, it has proven difficult to reflect the all-encompassing significance of water in policies and financial investments around the world[10]. As a result, this leads today to inequalities in access to water resources as well as unsustainable use of water supplies and infringement of basic human rights.[11] Overall, inclusive stakeholder engagement and empowerment at all levels of decision-making processes are already a first step in ensuring full consideration of the multiple values of water.[12]

[5] Dehouve D, The Rules Of Construction Of An Aztec Deity: Chalchiuhtlicue, The Goddess Of Water (2020) 31 Ancient Mesoamerica 7

Blog: Why are we valuing water?