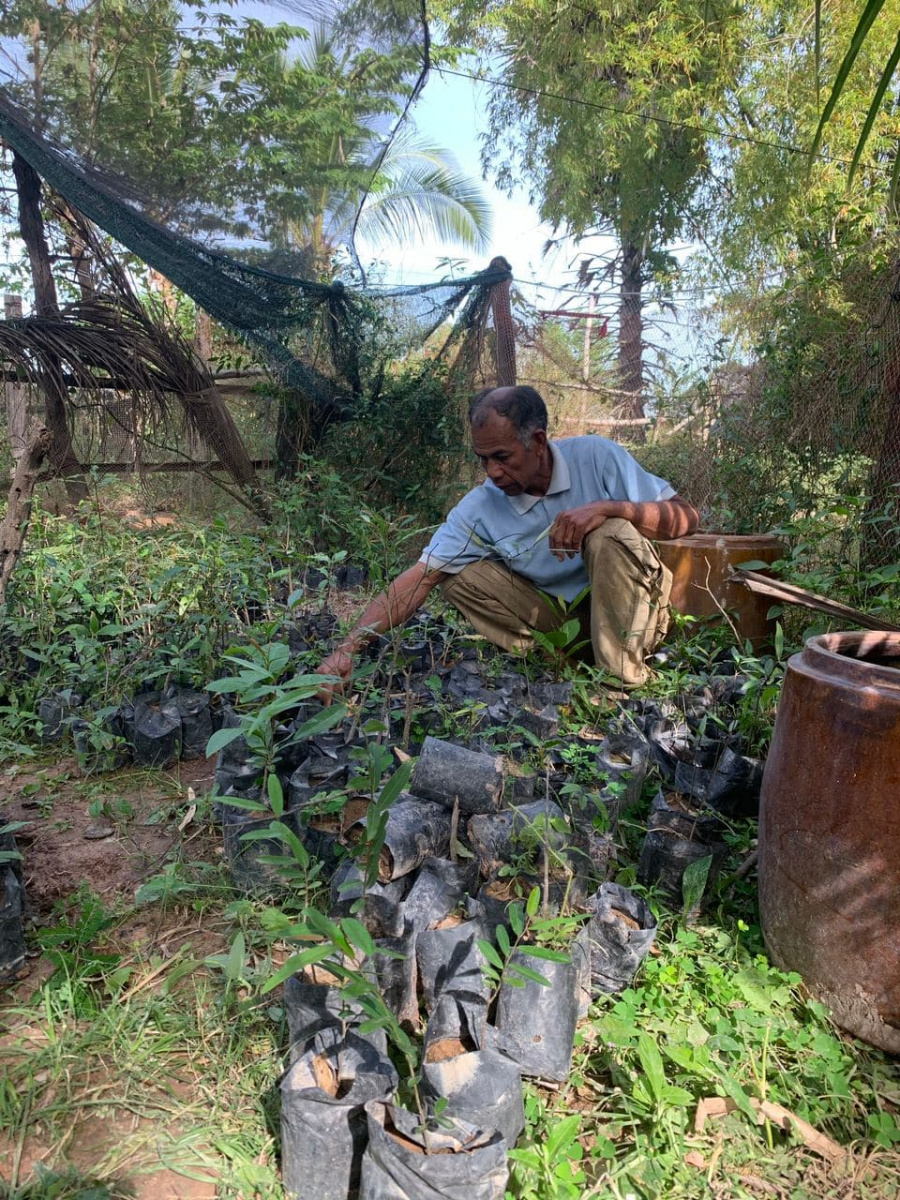 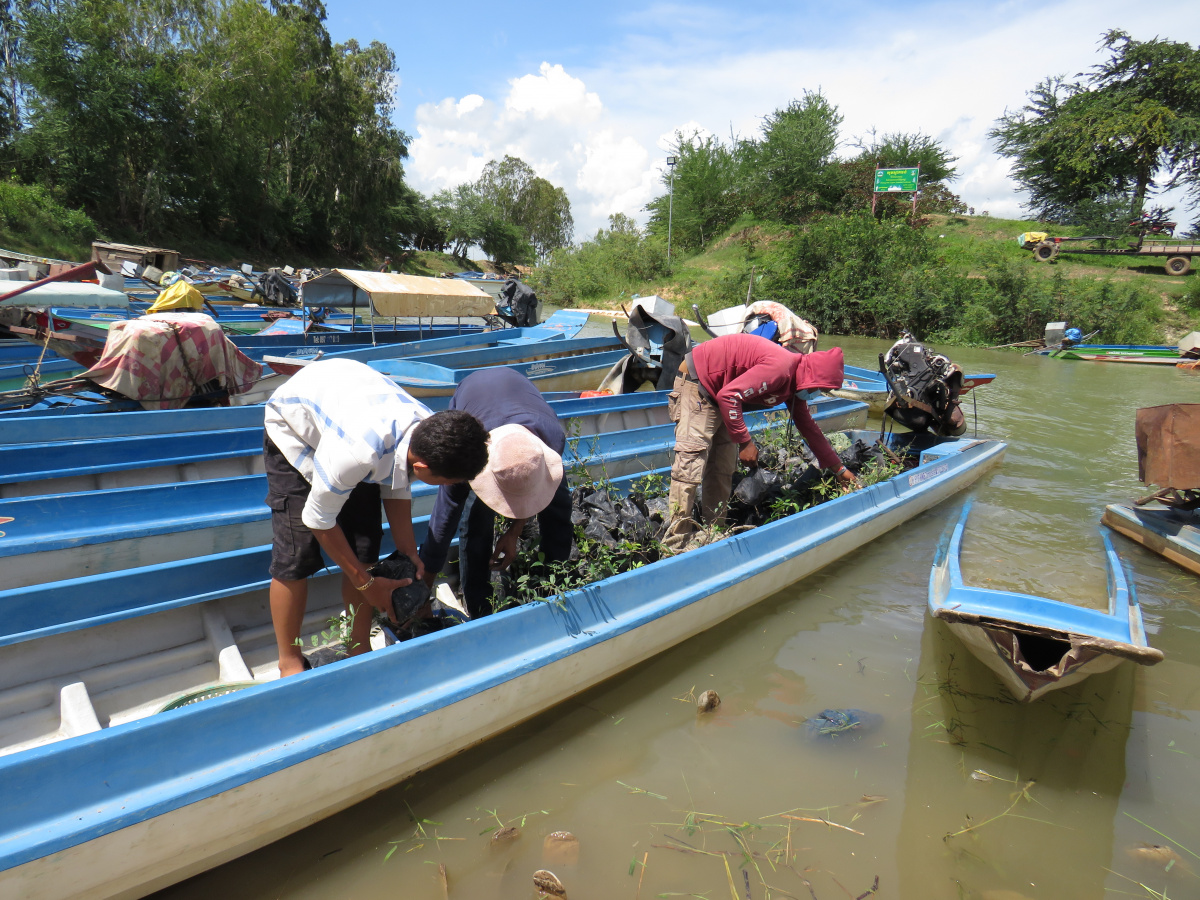 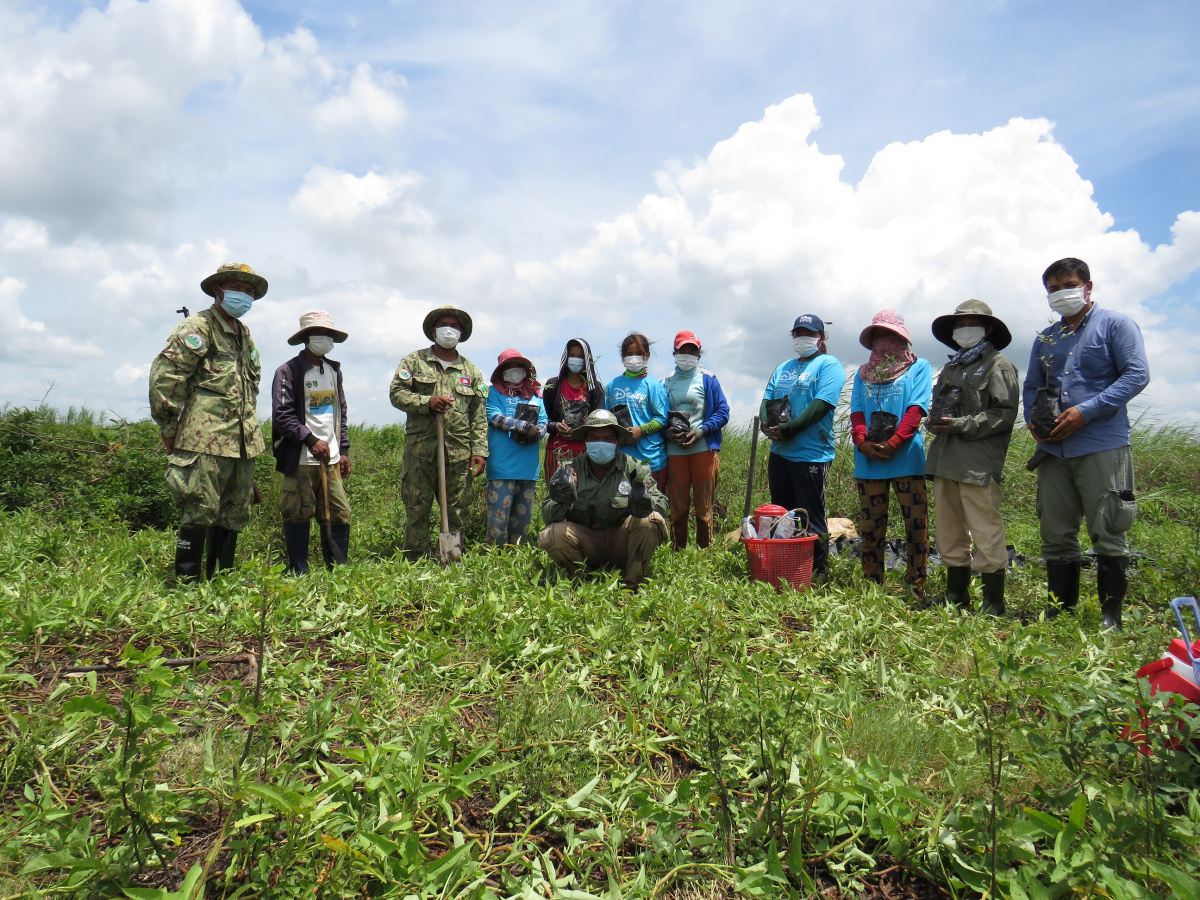 The small grant, supported by IUCN’s Mekong WET project, allowed WWT to restore areas of flooded forest and seasonally inundated grasslands in the protected landscape. The habitats were identified as priority areas for restoration and protection during the climate change vulnerability assessment and adaptation planning consultations for Boeung Prek Lapouv.

In July, WWT reforested five hectares (ha) of flooded forest in the northern section of the wetland’s Core Conservation Zone. Flooded forest is an important component of the ecosystem, serving as a fish nursery and habitat as well as acts as carbon storage, however, only a fraction of the original forest remains.

The reforestation process began by seeking advice from Conservation International on tree and shrub species and composition appropriate for the wetland. Project staff worked with local community members to establish a permanent tree nursery, not only for this project but also for future planting schemes. Community members collected 1,600 seedlings of six different native inundated forest species and grew them in the nursery. Not all the desired species could be found in the Protected Area, therefore, 1, 200 trees and shrubs were sourced from the Tonle Sap Lake, where large areas of flooded forest are found.

Seedlings were planted in a location agreed with local partners and the community, and the Ministry of Environment provided their approval of the site selection. The planting site included a former area of gallery forest historically known as a popular waterbird roost. A brief check on the seedlings in late September revealed a high survival rate. WWT will continue to check the health of the planted trees and replace them with spare seedlings grown in the nursery if needed. The reforestation completed through this project is regarded as a pilot for future planting schemes.

The Protected Landscape also contains one of the last remnants of seasonally inundated grassland in the region. This grassland supports a high percentage of the rapidly declining Southeast Asian population of the sarus crane (Grus antigone), which feeds on Eleocharis grass species. Recently, the quality of grasslands at the site has deteriorated due to land drainage, and grasslands are also under threat from the predicted reduction in rainfall due to climate change.

WWT restored approximately 25 ha of grassland habitat. The process involved substantial negotiations between WWT and the local community, rangers, partners and MoE to agree on the location of the conservation work. Prior to the commencement of on-site activities, WWT had to raise awareness among the local communities about this activity to avoid being mistaken as illegal land encroachment.

The restoration works included the blocking of 24 unused ditches to reduce water loss from grassland areas and raise groundwater levels; lowering ground levels in areas of poor quality grassland to promote wetter ground conditions for Eleocharis grass to grow; infilling of an 800m unused ditch to prevent water loss, and the impoundment of an eight ha area of grassland to retain water for longer at the end of the wet season. An area of poor quality grassland was plowed to investigate the effect of this treatment on grassland plant regeneration.

The restored grassland areas are being monitored in order to assess the effectiveness of the restoration works, which will be known in 2-3 years. The project activities have informed practical wetland restoration knowledge, bringing multiple benefits to future restoration works at the site and across the region.

“The two restoration projects have been received well by the local community, many of whom know these will bring long-term benefits to the wetland” said Ms. Srun Bunthary, WWT’s Technical Officer in Cambodia. Bunthary added, “our team really learned a lot from this work, not only on the technical aspects but how to engage local people and bring them on board. It has given us great confidence to carry out further restoration works in the coming years.”

Funded by the International Climate Initiative (IKI) of the German Federal Ministry for the Environment, Nature Conservation, Building and Nuclear Safety (BMUB), the “Mekong WET: Building Resilience of Wetlands in the Lower Mekong Region” project aims to build climate resilience by harnessing the benefits of wetlands in Cambodia, Lao PDR, Thailand, and Viet Nam. 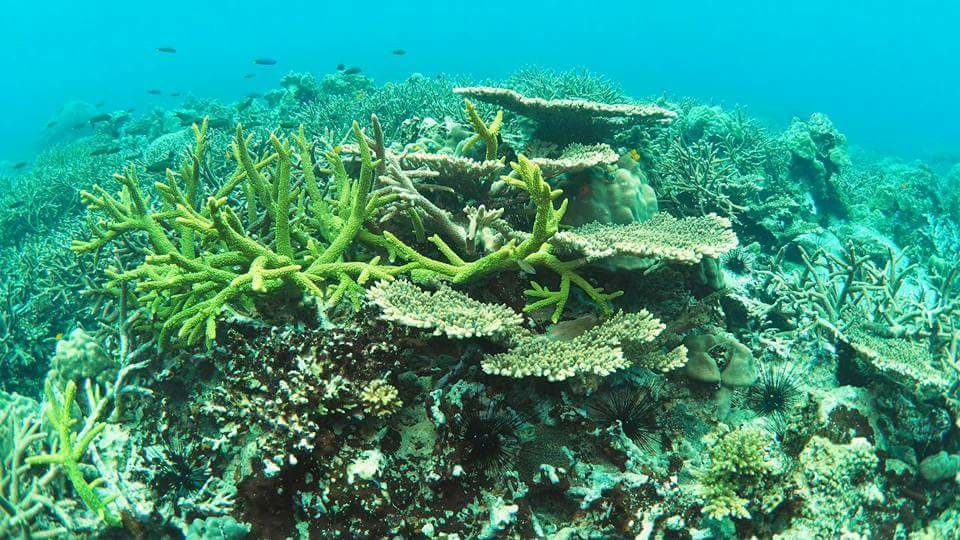 On 8 February 2018, the Cambodian government announced the establishment of the Koh Rong National... 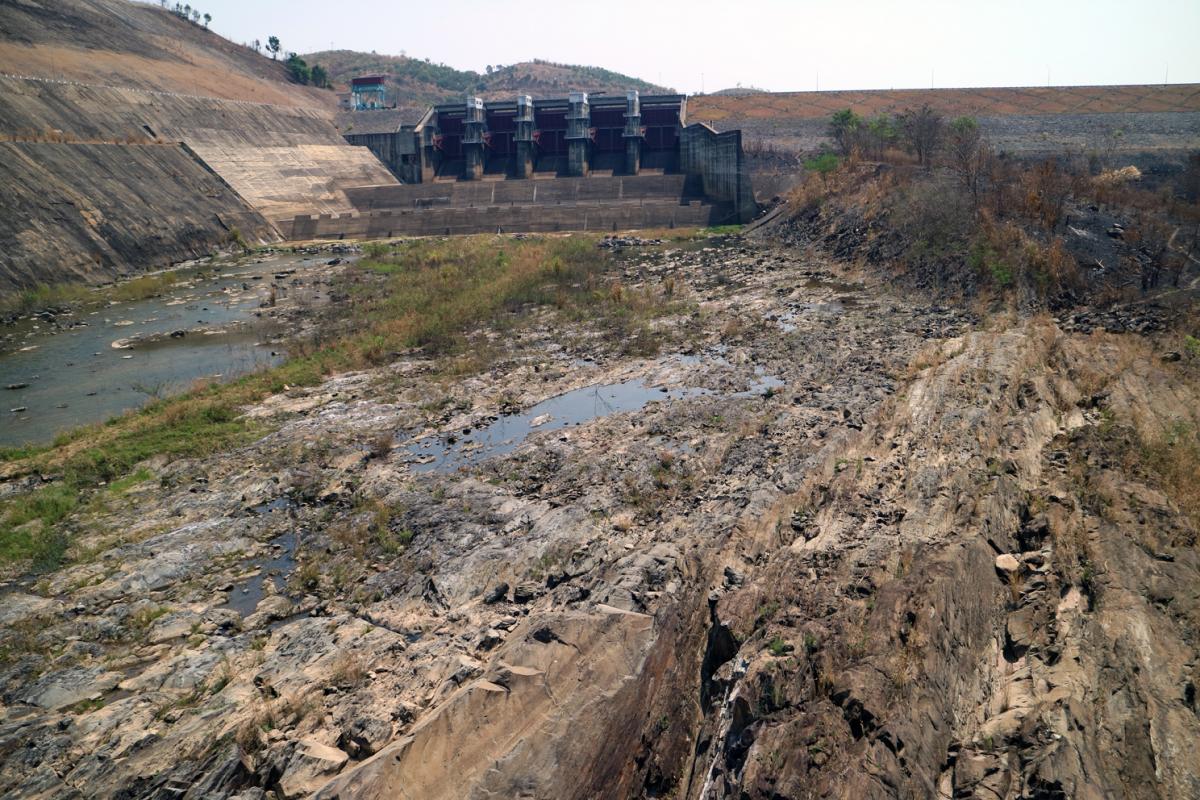 When asked about his success as a soldier and politician, U.S. President Eisenhower said: “Whenever...

This is the fourth in a series of six web stories exploring how Viet Nam can implement its COP26...