IUCN's Global Protected Areas Programme is sad to announce that more rangers have recently been killed in the line of duty. On 24 January 2011 a patrol of three rangers and five soldiers, protecting a road in Virunga National Park, Democratic Republic of Congo, were attacked and killed by the FDLR Rwandan militia, an illegal movement thought to include the perpetrators of the Rwandan genocide in 1994. 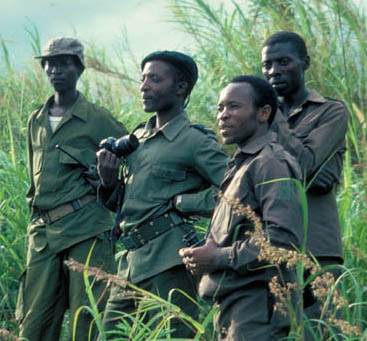 Officials say the attack is likely to have been carried out in retaliation for the destruction of two FDLR Rwanda camps by park rangers in December 2010.

The FDLR is extremely hostile to the Congolese Wildlife Authority (Institut Congolais pour la Conservation de la Nature, ICCN) which manages Virunga National Park, as the organisation has stopped the destruction of the forest for charcoal production, one of the main revenues of the FDLR movement.

Since 1996 more than 130 rangers have been killed in the park and for many years during the civil war in Congo, the rangers were working without pay.

The funeral of the rangers was held on 26 January at Mai ya Moto, a sacred site in the park where all rangers who died on duty are buried. Hundreds of people came to the funeral and a collection was made for the families.

Virunga National Park, Africa's oldest national park, was established in 1925 and has been a UNESCO World Heritage Site since 1979. Encompassing 7,800 square kilometres in eastern DR Congo, the park is managed by the Congolese Wildlife Authority, the ICCN.

The park is inhabited by 200 of the world's approximately 700 wild mountain gorillas and a small population of eastern lowland gorillas, chimpanzees, forest elephants and rhinos, among other wildlife.

IUCN, the International Ranger Federation and the Thin Green Line Foundation have an agreement to help families of rangers killed in the line of duty. Funds collected by the Thin Green Line are directly redistributed. In developing countries without social insurance, the ranger is often the only earner and these contributions are a necessity for survival. By donating to the Thin Green Line, you are contributing to helping families in desperate situations.