Transition to sustainability: towards a humane and diverse world 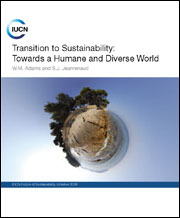 The environmental movement has made huge progress over the last decades. Among others, it has raised awareness of challenges facing humanity, helped develop a critical mass of policies, and worked towards the implementation of many of these policies in collaboration with other stakeholders. Now, however, we are at a turning point in the history of the global environmental movement. In order to rise to challenges of the 21st century such as climate change and peak oil it will not be possible to do business as usual; a step change will be needed. As IUCN celebrates its 60th anniversary, and marks six decades of global conservation achievement, it is also taking stock of the urgent challenges facing life on earth and reviewing its strategies. The key to future conservation action will lie in reconciling the needs of the environment with those of society in a manner which is equitable and just, and in promoting sustainable lifestyles and livelihoods as well as protecting endangered species and spaces. This document outlines IUCN’s Future of Sustainability initiative, the rationale for its implementation and describes how the conservation movement can play new and decisive roles in the transition to sustainability.