Getting seabirds off the hook

The Hawaiian longline tuna fishery has managed to reduce seabird bycatch by 67% since 2001 by making alterations to their fishing gear and methods, a new scientific study shows.  A combination of new bait technologies and fishing techniques have dramatically reduced seabird bycatch.  More birdlife could be saved, however, if the rules were applied in a larger area and fishing effort reduced in certain seasons. 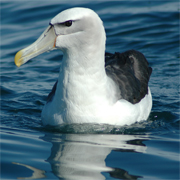 The study, conducted by IUCN, US NOAA Fisheries, and Ecological Modeling Services, and published in the journal Endangered Species Research, identified the most effective seabird avoidance practices and tracked their effectiveness.

Longline fishing occurs throughout the world’s oceans and uses gear that is suspended from a mainline drifting freely in the open sea at depths anywhere from the sea surface to 400 m.  It mainly targets large tunas, swordfish, other billfishes, dolphin fish and sharks.  Albatrosses, large petrels and fulmars are the main unintended victims of this practice as they are frequently hooked or entangled, dragged underwater, and drown as the fishing gear sinks.

The three alternative fishing techniques studied all contributed to reducing bird mortality. The amount of weight attached near fishing hooks is a key factor: by attaching heavier weights, the bait sinks faster and reduces the risk of birds being hooked and dragged underwater.  Thawing and dyeing fish bait dark blue,  and setting gear from the side of the vessel near the vessel hull instead of from the conventional position at the vessel stern were also effective in attracting fewer birds to the bait.

"Thirteen out of nineteen species of albatross studied under the IUCN Red List of Threatened Species are in deep trouble" says Eric Gilman, Marine Science Advisor for the IUCN Global Marine Programme, "the results of this study are encouraging, but bird-friendly longlining techniques need to be applied more universally if we are to arrest the decline of albatrosses and other seabirds."

The season and location of fishing, as well as the timing of daily fishing operations, were also found to have significant effects on seabird catch rates. The study identifies which seabird bycatch reduction measures elicit the highest voluntary compliance in Hawaii, which in turn has implications for exporting effective and commercially viable methods to other fleets to maximize compliance when onboard observers are absent. A substantial proportion of seabird captures occurred south of the area where mitigation measures are required for the Hawaii fleet. This boundary has also been adopted by the Western and Central Pacific Fisheries Commission. Moving this boundary further south would further reduce seabird catches in North Pacific pelagic longline fisheries.