The World Heritage Committee decided to remove the Galapagos Islands (Ecuador) from the List of World Heritage Sites in Danger, despite IUCN´s recommendation to the contrary. 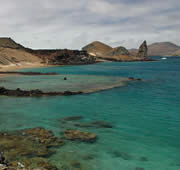 The Galapagos Islands, which have been called a unique "living museum and showcase of evolution" were inscribed on the Danger List in 2007 because of threats posed by invasive species, unbridled tourism and overfishing.

The Committee found that significant progress had been made by Ecuador in addressing these problems.

“The removal of this unique site of global importance to humanity is somewhat premature,” says IUCN Director General, Julia Marton-Lefevre. “IUCN stands ready to continue its work with the Ecuadorian government to fully implement the recommendations of the World Heritage Committee.”

“IUCN´s recommendation for the Galapagos was that it should not be removed from the Danger List as there is still work to be done,” says Tim Badman, Head of IUCN´s World Heritage Programme. “But we recognize the major efforts of the Ecuadorian government to rectify the situation there.”

“Threats from tourism, invasive species and overfishing are still factors and the situation in the Galapagos remains critical,” adds Badman. “We will need continued strong commitment from the Ecuadorian government over the coming years to resolve these issues.”