The Marumaru Atua has set sail from Rarotonga, Cook Islands, the first of four Pacific voyaging canoes that will sail to Sydney for the IUCN World Parks Congress 2014, conveying the message to the world about Our People, Our Islands, Our Ocean, Our Future. 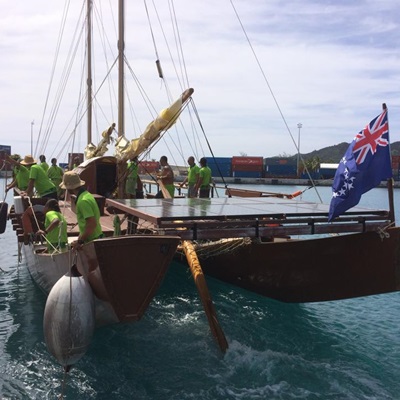 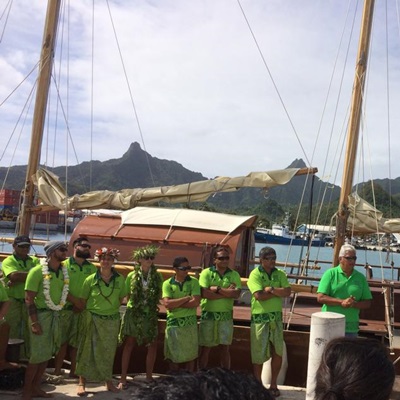 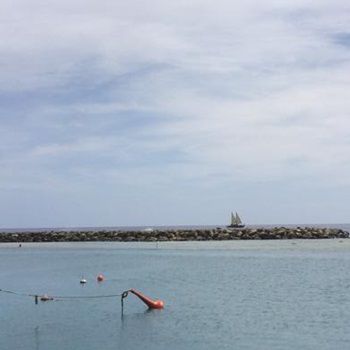 A large crowd farewelled the Marumaru Atua as it departed Rarotonga on Wednesday, with a crew of 15 on board led by the master navigator Peia Patai. The Marumaru Atua will join with voyaging canoes from other Pacific Island countries as part of the ‘Mua: Guided by Nature’ voyage. The canoes will travel via Samoa, Fiji, Vanuatu and the eastern coastline of Australia, joining up with the voyaging canoe from New Zealand before arriving in Sydney.

The Mua voyage will convey the Pacific Island’s message to the world about Our People, Our Islands, Our Ocean, Our Future. The people of the Pacific have rich and diverse cultures shaped by the environment, with islands and communities connected as guardians of the great ocean. But the ocean is being overexploited. The effects of climate change – rising sea levels, rising temperatures, ocean acidification and more intense storms – are damaging crops, threatening food security, affecting freshwater tables and intruding into island homes. The Pacific people are calling for partnerships to help sustain the Pacific Islands for future generations and for the health of the planet.

“[We are] embracing the legacy left to us by our ancestors. We will peacefully and positively advocate for a healthy ocean and for the livelihoods of Pacific communities. We will convey the Cook Islands message to the world on the protection of the environment and mitigation on the rising sea levels, and our stand on pollution and global warming. We call on the people of the Cook Islands to join us in this voyage,” said Mr Tua Pittman, Vice President of the Cook Islands Voyaging Society.

“Every Pacific Islander is sailing with the Marumaru Atua as we take this journey and this important message to Sydney. Cook Islanders have started a voyage that eventually the whole world must take if we are to bequeath to future generations the planet we enjoy today” said Mr Taholo Kami, IUCN Regional Director for Oceania.

Cook Islands Prime Minister Henry Puna is expected to arrive on board the Marumaru Atua when it sails into Sydney Harbour for the opening of the IUCN World Parks Congress 2014 to highlight the Our People, Our Islands, Our Ocean, Our Future message. The Congress is the landmark global forum on protected areas, held once every ten years, and is expected to bring together more than 3,000 people from at least 160 countries. Prime Minister Puna will highlight his commitment to establish one of the largest marine protected areas in the world – Marae Moana – which covers more than 1 million square kilometres, the entire southern half of the Cook Islands’ exclusive economic zone.

The Cook Islands communities in Australia are excited about the visit and are preparing fundraising activities and organizing cultural activities while Marumaru Atua and her crew are in Australia.