Corruption in fisheries – from bad to worse

Corruption in global fisheries is compounding the devastating effects of overfishing – and the problem could get worse, according to IUCN today 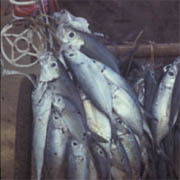 Corruption in fisheries is increasing against a backdrop of declining fish stocks and increased consumer demand. It taints all aspects of the fishing industry, from the scientific evidence that quotas are based on, to the mislabelling of fish.

A series of briefings released ahead of a key meeting about corruption in fisheries shows that consumers are unwittingly sucked into the subterfuge as they do not realize exactly which species of fish they are buying. Not only may species be mislabelled, but some products are falsely marked “ecofish”, which undermines sustainable seafood campaigns.

Fisheries corruption undermines the ability of scientists to know how many fish are removed from the oceans, causing inaccurate stock assessments. Fisheries managers are therefore far more likely to approve total allowable catches that are higher than those that would be based on sound scientific advice.

“Scientists’ evidence is not being taken into consideration when it comes to management decisions on fisheries and quotas,” said Deputy Head of IUCN’s Global Marine Programme Andrew Hurd. “Fisheries managers should be held accountable when ignoring scientific advice.”

The World Conservation Union (IUCN) is organizing a Fisheries and Corruption meeting, hosted by the World Bank, in Washington to identify all the points where corruption happens from the hook to the dinner plate and find solutions.

At the meeting, IUCN will be calling for better enforcement of current rules and laws, better tracing of fish, the introduction of satellite tracking of fishing vessels and better labelling of fish.

The meeting will be held on January 30 and 31 at the World Bank in Washington DC and will be co-chaired by the Head of IUCN’s Global Marine Programme, Carl Gustaf Lundin.

Materials for the Media:

What are the problems associated with corruption in fisheries?
English [mp3]

What can be done about it?
English [mp3]

What is IUCN doing to help stop the problem?
English [mp3]

About the World Conservation Union (IUCN)

Created in 1948, the World Conservation Union (IUCN) brings together 83 States, 111 government agencies, 800 plus NGOs, and some 10,000 scientists and experts from 148 countries in a unique worldwide partnership. The Union’s mission is to influence, encourage and assist societies throughout the world to conserve the integrity and diversity of nature and to ensure that any use of natural resources is equitable and ecologically sustainable.

More information can be found at www.iucn.org

When Bad Gets Worse: Corruption and Fisheries - Draft